The first significant date in this history of Heath Grammar School is February 15th 1585 when Queen Elizabeth signed the charter establishing “the free grammar school of Queen Elizabeth.”

Dr John Favour, Vicar of Halifax from 1593 to 1624, is regarded as the founder of the school being responsible for obtaining the piece of land upon which the first school was built – two acres of barren heath land donated by Henry Farrar in 1597. This, together with money donated by Sir John Savile, enabled the first Heath school to be built, opening in 1600.

Heath Grammar School was built by the Ackroyds of Hipperholme. There was a schoolhouse and a house for the master, adjacent to it. The old road leading to it became Free School Lane. 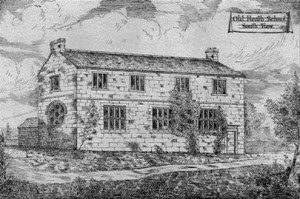 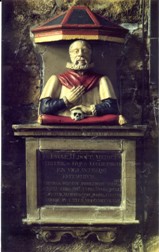 In 1600 Richard Wilkinson was Master followed in 1603 by Robert Byrron to 1620. School furniture was bought and as the first charter said, “the bringing up, teaching and instructing of Children and Youth of the said Parish and Vicarage of Halifax, and also of other Villages and Hamlets near adjoining unto the same………..in Grammar, and other good Learning, to continue for ever.”

Two sections of the original school remain today – a stone plaque and the Apple and Pear window. The window, which is unglazed, was constructed by John Akroyd(1556-1613) and sons, masons, and formed part of the gable wall of the original building. It was moved intact to its present site in 1879. At the front of the 1879 school, set above the front door, is a replica window, this one glazed and with an inscription where the word “GRAMMER” is, quite wrongly, spelt. 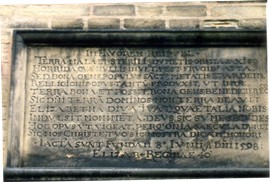 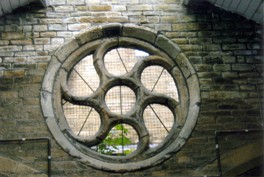 In 1603 Dr Favour “bestowed on the School a fair Couper’s Dictionary, and a fair Greek Lexicon, and a fair English Bible.” These dictionaries, dated 1598, were recorded in 1879 as in good condition apart from the title pages. Of particular interest is the graffiti; signatures, some dating back over the centuries. The books are housed in the current school.

It is documented that in 1612 school began at 6am.and finished at 5pm with a break from 11am.to 1pm. Sunday was free, as was Thursday afternoon, and Saturday morning was given over to religious instruction. A master was in charge assisted by an usher, a sort of deputy, often unqualified. The boys were expected to make their way to school without noise or playing and to take off their caps to those they met. Whilst in school they spoke only in Latin not English.

An opportunity was taken upon the death of Thomas Lister, the Master from 1688-1728, to recreate and confirm the charter and in 1731 this was signed by Queen Caroline, in the absence abroad of GeorgeII. Incredibly, this too is in school complete with its seal.

None of the processes happened without a great deal of correspondence and business led largely by Mr Richard Sterne, uncle of 18th century writer, Laurence Sterne of Wood Hall.

There was a succession of Masters across the eighteenth century, bringing mixed fortunes, but with the leadership of Richard Hudson (1771-1782) and Gough Willis Kempson (1783-1788), Heath entered a period of time during which it flourished. The curriculum was broadened from just Latin, Greek and English and the school and school house were enlarged. Whilst still only a one room building, the school could take 60 boys and the house was big enough for the master, his family and 30 boarders.The flourishing of the school must in some part have reflected the expanding commercial activity of Halifax leading to an increased demand for education. Also the end of the 18th century saw some changes in land ownership and use, returning a profit to the school. By 1812 the first bank account was opened and Heath was led by Robert Wilkinson (1789-1839) succeeded by John Henry Gooch, then Thomas Cox. This period saw both Gooch and Cox thwarted in their attempts to make Heath a public school, as had other similar endowed schools. Changes, in every respect badly affected the fortunes of Heath. Plans to sell land to generate income were postponed to the 1860s. In 1869, the Endowed Schools Act sought to reorganise education with Heath fighting, but failing, to avoid this by claiming to be a Church of England School, and having reorganisation imposed in 1873. Gooch had added mathematics to the curriculum, and Cox added “a systematic study of English Literature and the French Language, and a more extensive acquaintance with Divinity.” There was also provision for Drawing, Drill, Science, Chemistry, Geography, History, Art and Book-Keeping.

The governors decided that to accomplish planned changes to Heath that they would entirely rebuild the school with the sale of land in Skircoat providing funds. The ambitious project eventually cost £10000 and architects, Leeming and Leeming, designed the new school. The new building, opened in 1879, housed sixteen classrooms, art and science rooms, a library and a gym. It could accommodate 250 boys, but none boarding, although the new master’s house did have room for five boarders. 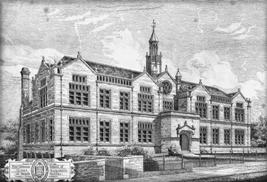 Despite all of this, with the departure of Thomas Cox in 1883, Heath School closed until 1887, being reported in the media as “hopelessly insolvent.” Certainly there were many rival schools providing competition for Heath as could be seen in advertising in the Halifax Courier. No official or public explanation states why in 1883 Heath School had only one master and thirteen boys, but happily, with Halifax citizens taking on the role of guarantors and with the appointment in 1887 of

Archibald William Reith, the school reopened and he stayed for 21 years.1897 saw financially successful tercentenary celebrations and Heath saw a gradual and sustained gain in academic success and popularity. Having operated as an independent school up to 1922, Heath was then faced with a choice of staying with a government grant or opting for a county council one. They chose the latter and in 1926 Heath became a state grammar school maintained by Halifax Borough Council. Following Reith, Heath was led by the Headships successively of

William Edwards and O.R.A.Byrde to 1935. Between 1916 and 1935 electric lights replaced gas and the school grounds were further developed with tennis courts and in 1922 the Kensington sports field was bought.

The Heathen, the school magazine, appeared in 1918 and copies of many of these survive in the Crossley Heath School library. The Junior School is occasionally and fleetingly mentioned in the Heathen and certainly in the 1920s there were three forms.

As elsewhere, the Second World War impacted on the school with staff and older pupils going into the armed forces. Heath Memorial gates, erected in 1949 commemorate those who did not return. The final series of Heads until the closure of Heath saw D.J.D.Smith carry Heath through the period of the 1944 Education Act, when parents were relieved of the payment of fees and the Junior School had to close with remaining boys transferring to Crossley and Porter School– the first Crossley Heathans! 1946 saw the arrival of Head Walter Ronald Swale who had to adapt to the pace of change in post war Britain whilst defending the grammar school tradition and its academic ethos. Albert Crosby took the school through the period from 1971 when frequent government plans might have seen Heath merge with other schools as part of comprehensive education plans. Under the final Headship of J.T. Bunch in 1984, a decision was taken by the Secretary of State for Education that Heath would close in August 1985, just six months after celebrating 400 years in existence. The popularity of those celebrations was tangible evidence of the esteem in which the school was held. 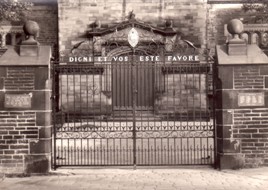 The 17th century statue of Dr John Favour, vicar of Halifax 1593-1623/4 and founder of Heath Grammar School, restored in 1993 after an appeal by the Old Boys which coincided with the 400th anniversary of Dr Favour’s arrival in Halifax. He is shown wearing a red doctor’s hood over his robes, with a crimped frill round his neck, ruffs at his hands and a black skull cap on the crown of his head. He was born in Southampton, educated at Winchester and admitted to New College, Oxford in 1576.

The bust stands in Halifax Parish Church where Founder’s Day used to be celebrated annually in June, and a replica is in Crossley Heath Learning Resource Centre.

Gooch succeeded Robert Wilkinson who had been Head for 50 years (1789-1839). Over time, Heath had ceased taking boarders and consequently had failed to attract students from further afield who wanted a classical education. Gooch had been a scholar of Trinity College, Cambridge and rebuilt academic success with scholars progressing to university. He introduced mathematics to the school syllabus where previously only Latin and Greek seem to have been taught. There is also in school a petition to the Archbishop of York presenting John Henry Gooch for appointment as Master of Heath Grammar School 6th November 1840, and approval given by Edward Lord Archbishop of York 19th March 1841. Also copy(?) of seal, together with an article explaining the origin of the seal. 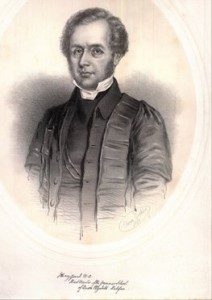 Thomas Cox, a scholar of St John’s College, Cambridge, was the final Headmaster at the old Heath building, from 1861-1883. Seen here, mortar board in hand; he broadened the curriculum to include English Literature and French Language. He wrote “A Popular History of the Grammar School of Queen Elizabeth at Heath”, a book long out of print, but which Crossley Heath School has several copies of. 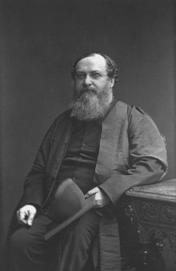 Archibald William Reith, Headmaster 1887-1908, leading Heath Grammar School after its reopening. He died in 1908 and was commemorated by a plaque in Halifax Parish Church, whose praiseworthy epitaph ends “and by his untiring labours and unwavering fidelity administered it with such devotion that, when at length having fulfilled his task he was snatched away by death in the year of Our Saviour 1908, he left it to his successors pre-eminent for the number of its pupils, for the greatness of its distinction, and above all for the courtesy of its manners.” 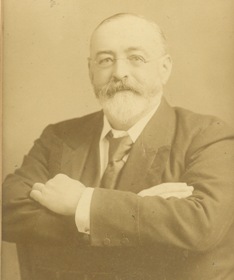 William Edwards, Headmaster 1908-1916. Several masters left the school to serve in the armed forces but Edwards led Heath to first place in the local Oxford examination results in 1915. Having moved to Heath from Bradford Grammar School, he left to return there as Head in 1916.

Pictured in his study is Owen Richard Augustus Byrde (Oscar), one of the renowned Headmasters of Heath Grammar School. His Headship lasted from 1916 to his retirement in 1935 during which time the school gathered great academic strength achieving results unsurpassed by few equivalent schools at the time. A verse by a boy at the time summarised him thus “Old Oscar was a kindly man, the school he simply loved it. He never had to open a door because his tummy shoved it!” Colleagues paid tribute to him as a loyal friend, generous, warm-hearted and sympathetic. He died in 1936. 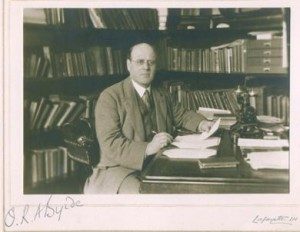 Douglas Joseph David Smith M.A. was Headmaster of Heath School 1935-1946. He was a Senior Scholar of Trinity College Cambridge and led the school to great academic success. The Heathen saw him as the lubricating oil that kept the school machine running smoothly despite the staffing difficulties engendered by World War Two. He was highly regarded, combining the classical tradition of Heath with modern educational methods introduced by the 1944 Education Act. At this time, Paul Barker, future Headmaster of Crossley and Porter School and first Head of Crossley Heath School was a pupil. 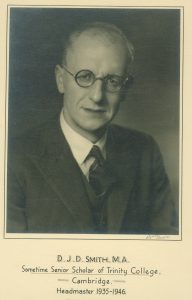 Albert Crosby 1971-84, followed W.R. Swale as Headmaster and led Heath School through difficult times when the local authority wished to close the school and introduce a comprehensive system of education.